Getting your passport renewed in the Philippines is not easy as 1-2-3. For the past three months, I have been trying to get an appointment with DFA but agencies like to take all the slots, and sell them for a premium service :(

I know it would be impossible for me to get a slot here I Cebu in a sufficient time, I tried other locations in the Philippines and was able to secure an appointment slot in Dumaguete City, Negros Oriental.

Since the flights to Dumaguete weren't exactly reasonable to make a quick day trip, I booked a flight and hotel for one night as soon as I got my appointment confirmed. A few days later, I got a message from my good friend, @bonjovey saying that she wanted to join me on this trip (since she never got to see Dumaguete.) I was happy to know that I wouldn't be traveling alone- It's always more fun to travel with a friend!

There are ony two flights daily from Cebu to Dumaguete on Cebu Pacific Air; So I was glad when @bonjovey was able to get the same flight as mine. The downside of the trip, was having to wake up at the buttcrack of dawn, since our flight waas scheduled to depart at 5:30 in the morning. I am not a morning person, (Especially when I can't get coffee within 30 minutes of waking up).

We were only going to stay for two days, and one night, so I didn't bother bringing my whole wardrobe, only extra clothes to wear the next day. I actually regretted this, since the following day we wanted to go swimming in the hot springs, but I only had one set of dry clothes.

At 3:20am on the day of departure, I met @bonjovey in the lobby of my condo and we scheduled an Uber pickup to the airport. At this time in the morning, it would have been hard to catch a taxi. Unfortunately, the first two Uber drivers canceled my booking and I wasn't happy about it. I have missed my flight before, so this was a bit stressful for me. Granted; at 3am there isn't much traffic to the airport. This trip should only take about 30 minutes at this time, but trying to catch a flight at 9am, around noon, or after 5pm would take at least an hour and a half. So, I booked another one and I sent a message begging him not to cancel this trip or else we could possibly miss our flight (my fingers were crossed). It was nice that the driver read and responded to my message- And assured me that he was on his way, and we would get to Lapu Lapu on time. 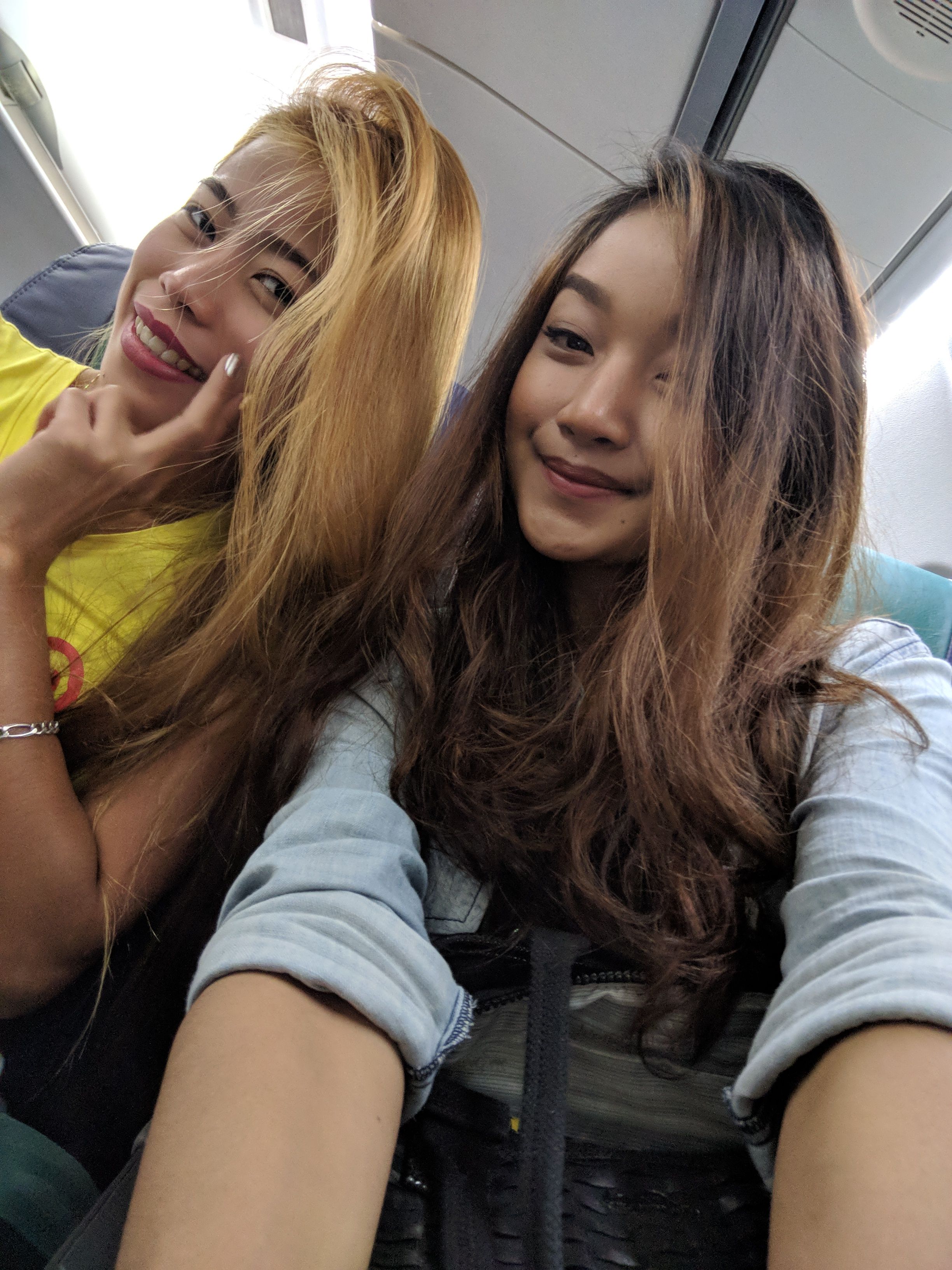 We got to the airport about an hour before our boarding time and everything went smoothly from checking in, to passing through security, phew! I always get nervous when I travel, because the Philippines security and customs seem to enjoy giving Filipinos going abroad a hard-time. So even when I fly domestic, I get a bit nervous. I think am starting to like the idea of traveling with less baggage, means less hassle ;)

When we got to our gate, it wasn't long until they announced our flight would start boarding soon, and immediately everyone rushed to get in the queue. Me? I sat until almost everyone else got on the flight-They can't leave without us anyways :) We arrived in Dumaguete 30 mins ahead of schedule which is surprising because most flights with Cebu Pacific that I flew on for the past five years, were always delayed.

Btw, @bonjovey and I didn't have any plan laid out for this trip so when we got out of the plane we looked at each other, confused and laughing wondering what to do next, lol! It was both our first time to visit this place and we have no idea where to go and what to do at 5:35 in the morning since our check-in time at the hotel is not until two in the afternoon.

We decided to do the “bahala na system” which means “whatever”, so we'll just go wherever the road may lead us. Outside of the airport terminal, there were only two motorbikes and few tricycles ready to pick up some passengers, since this flight is usually not too full. We got both of the motorbikes and told the drivers to take us to wherever he would recommend at such an early time.

The first place we visited was Rizal boulevard where we took the photos below.

It was a very nice day to just sit and watch the locals doing their own thing, and getting ready for the day. After taking a short walk down the boulevard, we decided to head to our hotel to see if we could possibly check in a bit early- So we can get some rest. Since it was much earlier than 2 pm, we had to pay an extra 650 pesos for the early check-in. I think it was worth paying for especially since neither of us got enough sleep the night before our flight.

The reason I booked this hotel over one that was overlooking the ocean, was because my appointment with DFA was less than a minute walk from our hotel.

Tips for those who have an appointment or who will schedule an appointment in Dumaguete:
You can arrive at DFA even 30 minutes before your appointment time so you can finish early. They prioritize applicants who scheduled an online appointment since they have all the documents already. 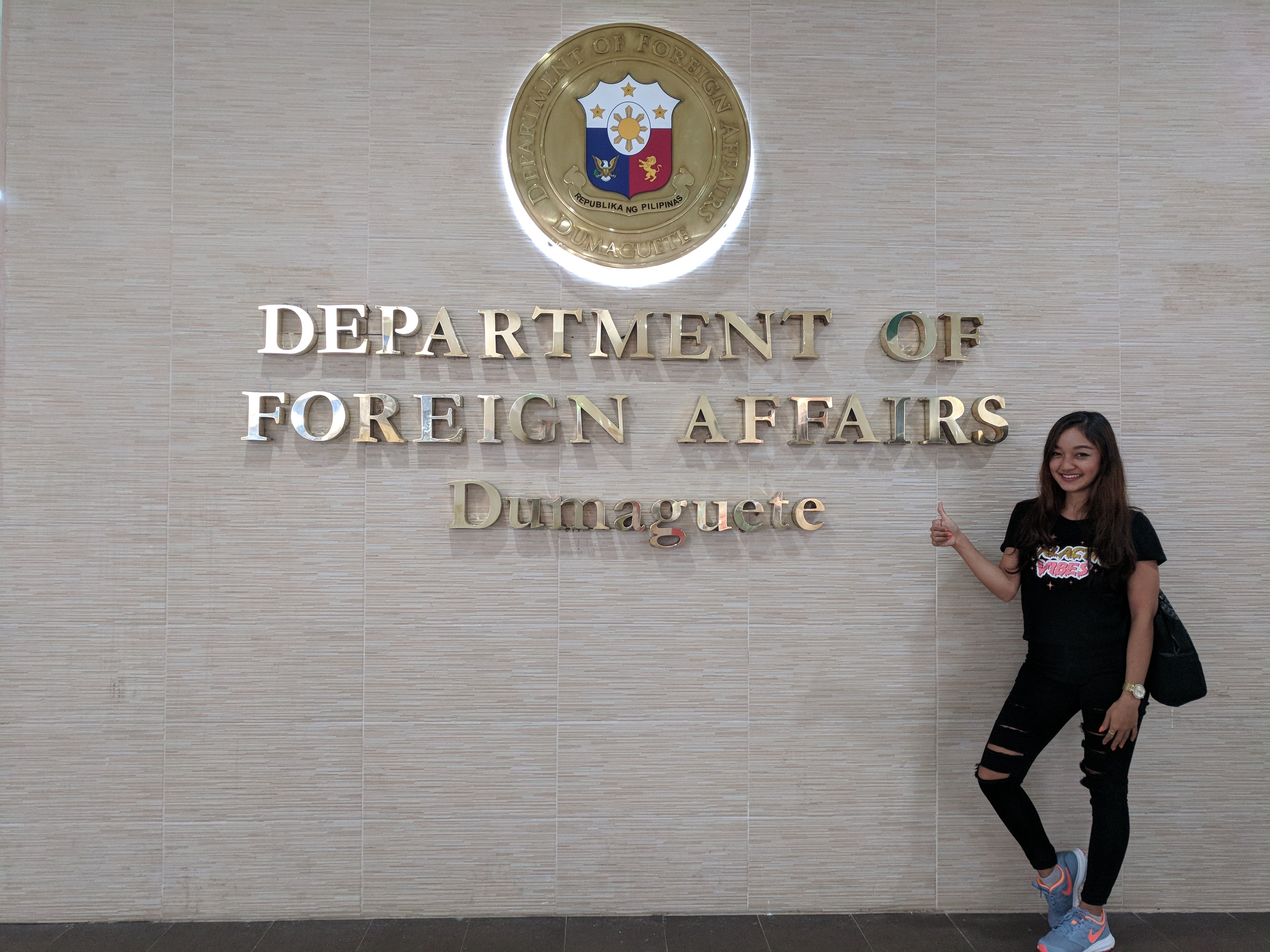 For a simple renewal of your passport, you only need your electronic passport (passport starts with EB), one photocopy of your old passport and one photocopy of page 1 & 2 of your online application form which is sent your email address when you schedule your appointment online.

P.S. The DFA system can only send email notification to Gmail accounts.

The passport appointment took about 45 minutes, (which was awesome because @bonjovey recently got hers renewed in Cebu and it took a bit longer)- And they told me they would send my new passport to my condo via LBC within 10 business days.

Now its time for me and @bonjovey to go see the beach! ^_-

It was a nice feeling walking on the beach with the smell of salt in the air and the sound of waves crashing upon the shore. There weren't many people at this time, so we decided to hang out a little bit longer. We pulled up a spot of sand, with a slab of driftwood, and took our time enjoying the scenery.

About an hour later, we decided to get an early dinner at a resort called PuraVida, that we found while walking on the beach. It was a nice looking resort with a native yet modern design. If we planned on staying for few more nights, we would have definitely stayed at this place. The staffs were friendly and the chef stopped by to say hello to us, and to make sure everyone was enjoying their meals, as they had been ordered.

Later that night we had an excellent opportunity to view the 'super-blue, blood moon'- While having our dinner on the beach. This was the highlight of my trip- An unforgettable experience to share with my dearest friend, @bonjovey. After a few hours, we left the resort full- with happy bellies. Then it was time to head back to our hotel and get some good night sleep. ^_-