We were looking for a specific restaurant, called Khao Soi Islam Restaurant in Chiang Mai that was recommended by one of the Youtubers. Following google map's direction, we walked from our hotel to the restaurant which was approximately twenty-five minutes.

It didn't seem like a far walk since we enjoyed seeing interesting stores, watching the locals and tourists. It's sort of bizarre feeling even if am only in Asia. Some people might think it's the same as the Philippines but for me, it's different whenever you are abroad, it's always exciting to learn the different cultures.

So, we finally found the restaurant but on the outside, it looks like a mini grocery store because you can't really see the restaurant until you get inside. We know we were on the right road and found the exact restaurant because of the sign outside. 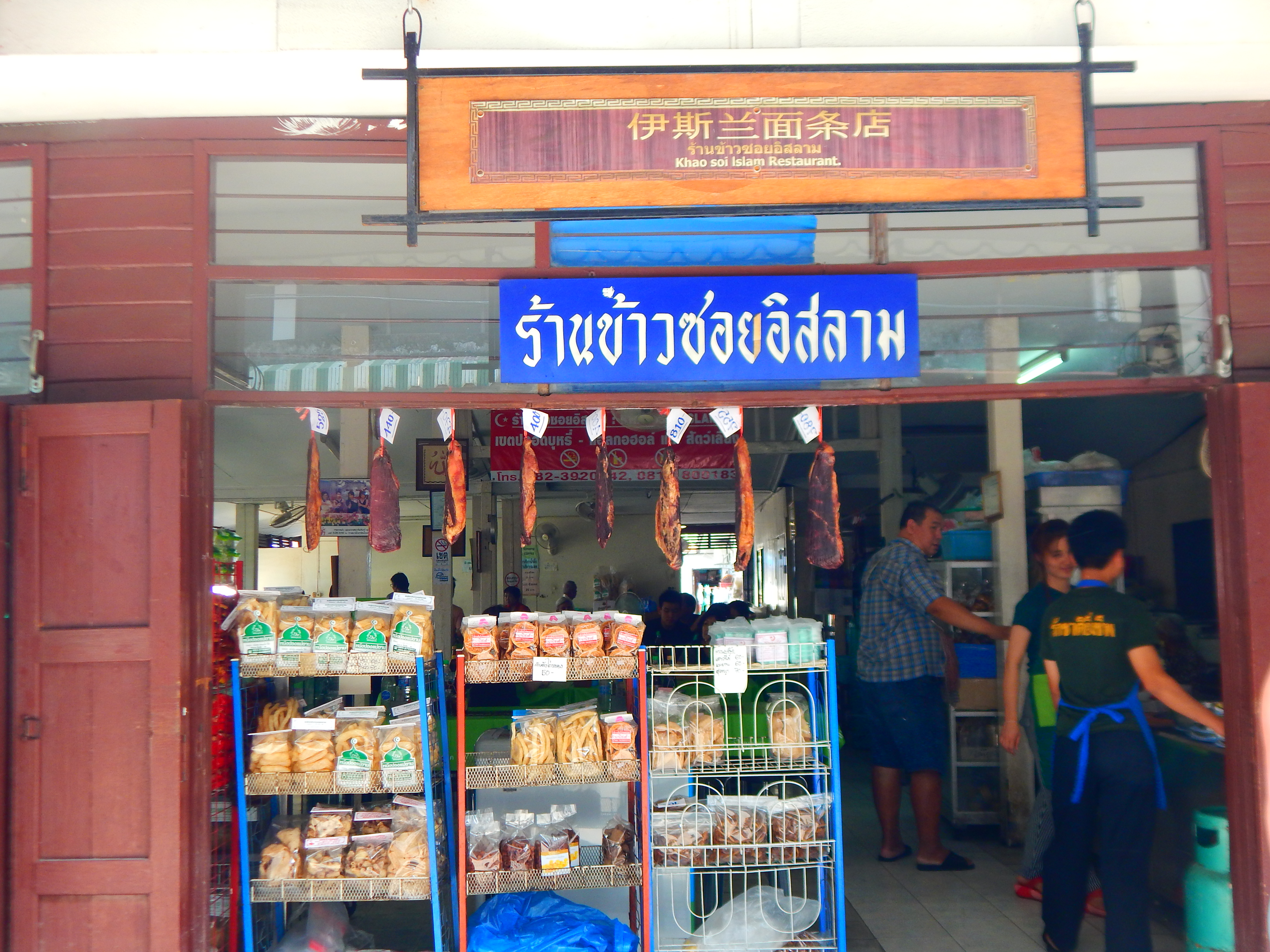 We went inside, and they have tables and chairs... so I guess it's not what I thought a grocery store, lol.
Let's learn about the origin of this dish.

History of the dish

A long time ago, Chinese people (also called Chin Haw or Chin Ho)who were from Yunnan, (the southern province of China), migrated to Thailand via Burma or Laos.

Khao Soi is believed to be introduced to the northern Thai cuisine by the Ho people.©

It started when the trade caravans were trailing the jungles of northern Thailand along the ancient routes between India and China. Those long caravans were carrying a wealth of exotic goods, leaving rich aroma of spices and the sweet scent of opium as they passed.©

The men on this long line of between fifty and one hundred miles would be Yunnanese Muslim Chinese, who dominated the trade routes and began to settle in Chiang Mai and the main towns of north Thailand at that time.©

The Yunnanese, or the Ho people as they generally called, were referring to themselves as ‘haan jeuu yen’ and ‘yuunnaan yuuh’. They established settlements, build Mosques and opened Halal restaurants were fellow Muslim traders could spend the night indoors and exchange latest information and news with other caravan traders over cooked halal dinner.©

It's a Chinese Muslims dish that's why it's only served with chicken or beef. It's basically a coconut curry noodles, they use coconut milk for the soup base and it's the most essential ingredient in this dish. They use fried egg noodles and add garnish to the dish like kaffir lime and shallots. 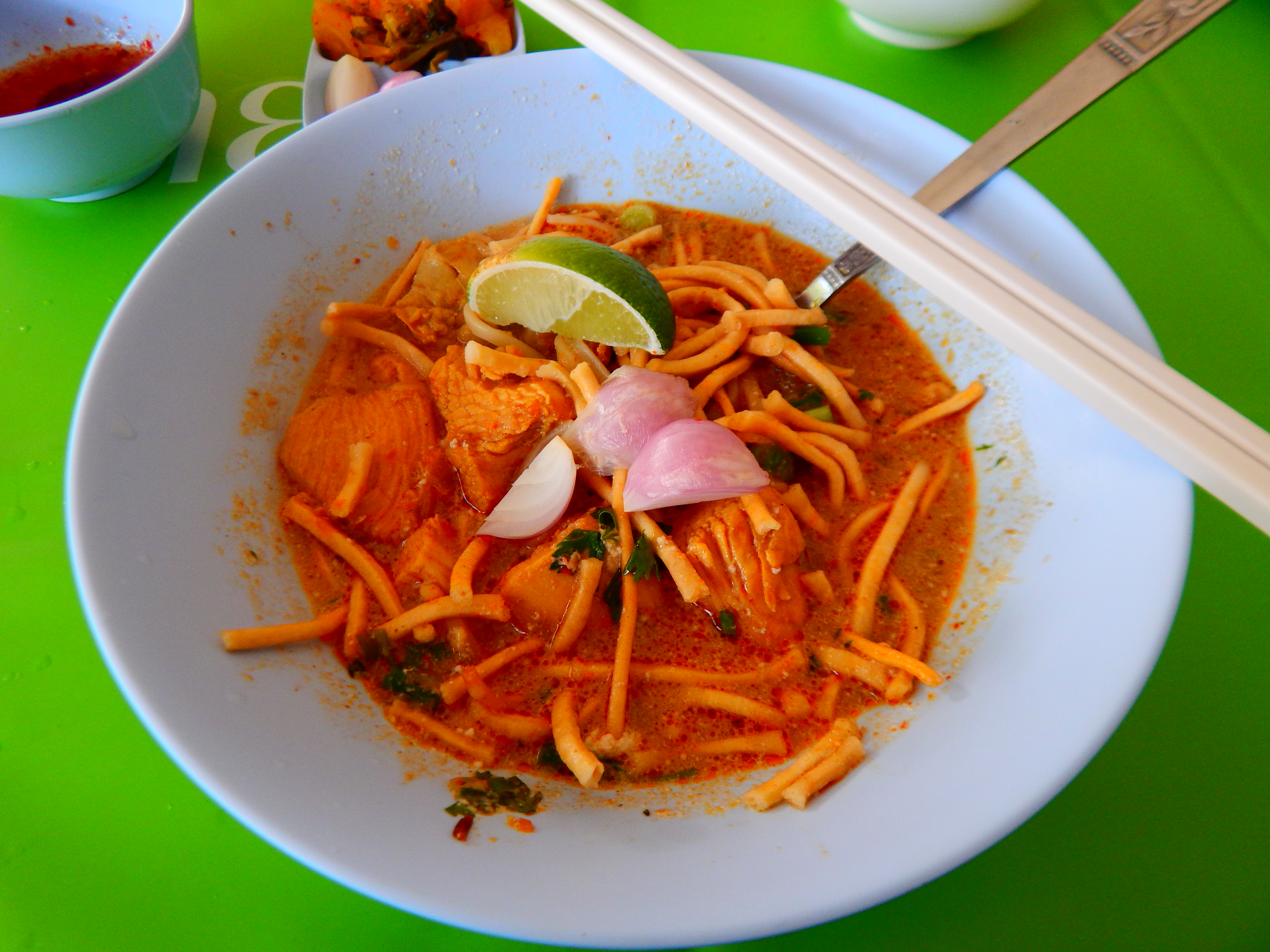 Alright, it's time to try this Khao Soi!

This is my second time trying this dish. We only ordered one bowl to share because we wanted to try a lot of different dishes while on this trip.

When our order arrived at our table, there and then I smelled the spicy aroma from the soup. We got the khao soi gai, (gai means chicken). Coconut curey with boneless skinless chicken with crispy egg noodles, some herbs, and shallots as a garnish on top. They also gave us some pickled cabbage, garlic and more spices on the side.

The crispy noodles were well mixed with the curry sauce. The sauce wasn't too thick or too watery, I would't know the best khao soi soup texture yet.

They fried the noodles just before they serve so it's crispy but when you let the noodles soaked a little bit longer in the sauce, it tasted so much better because you get more of the curry flavor.

The extra fried egg noodles that served as a garnish was a playful thought. The first time I tried this dish, I was confused why would they add noodles on top of noodles, hahaha but the ending, I actually enjoyed this dish a lot! 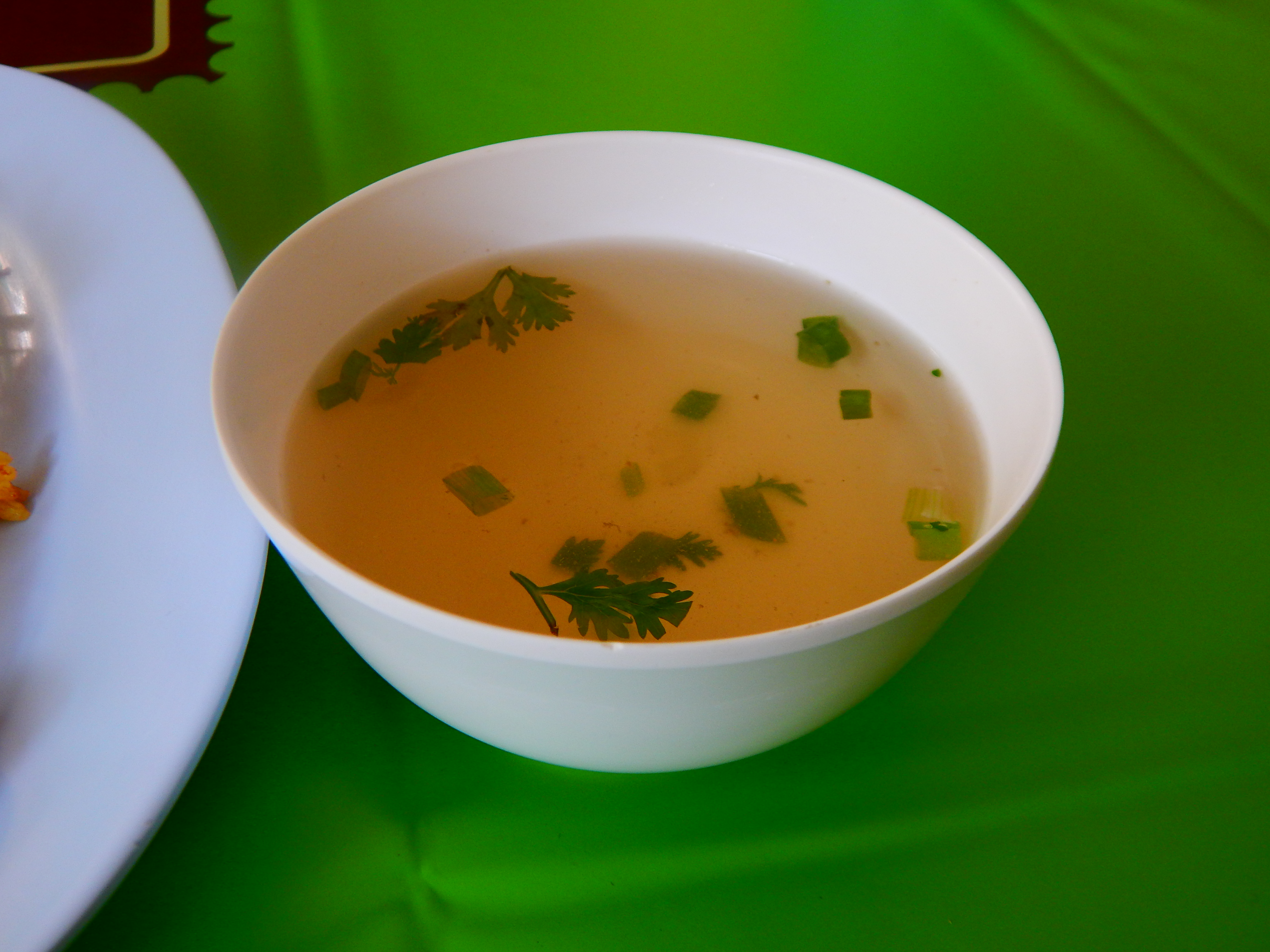 And oh they also give you a complimentary clear broth on the side. Even though it was scorching that day, I didn't hesitate to finish, it was good. 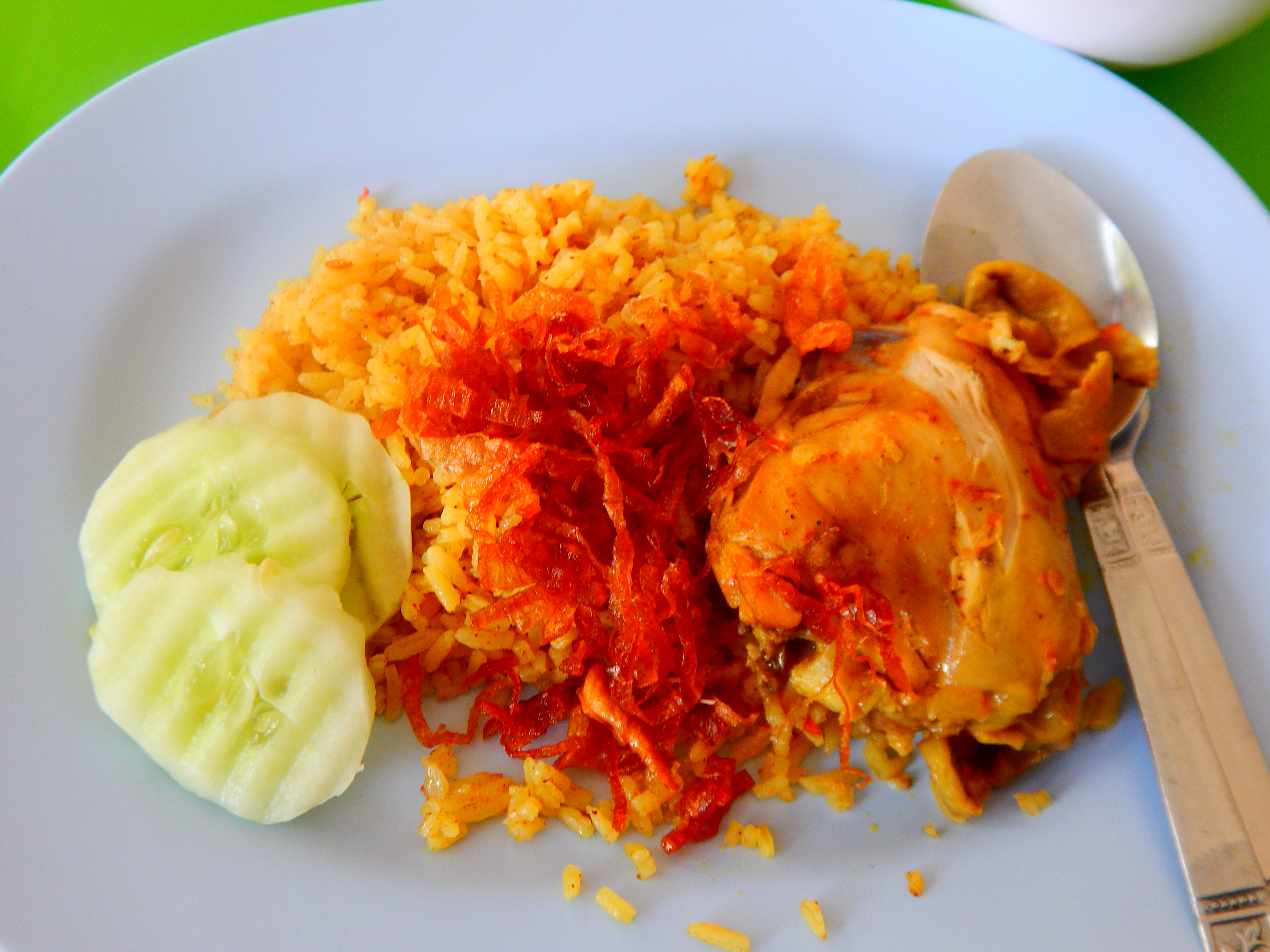 The chicken biryani is also not to be missed when you visit this place. Although the chicken was a little dry but the flavor made up for it and the rice was very fragrant, almost a perfect combo.

The fried onions were also very good! Gosh as simple as an onion can make dish lit! I like that they give you some slices of cucumbers because is a good way to clean your pallet. Overall the experience was fun and I would visit this place again.

I'd say this place is worth a stop when you're near the area. 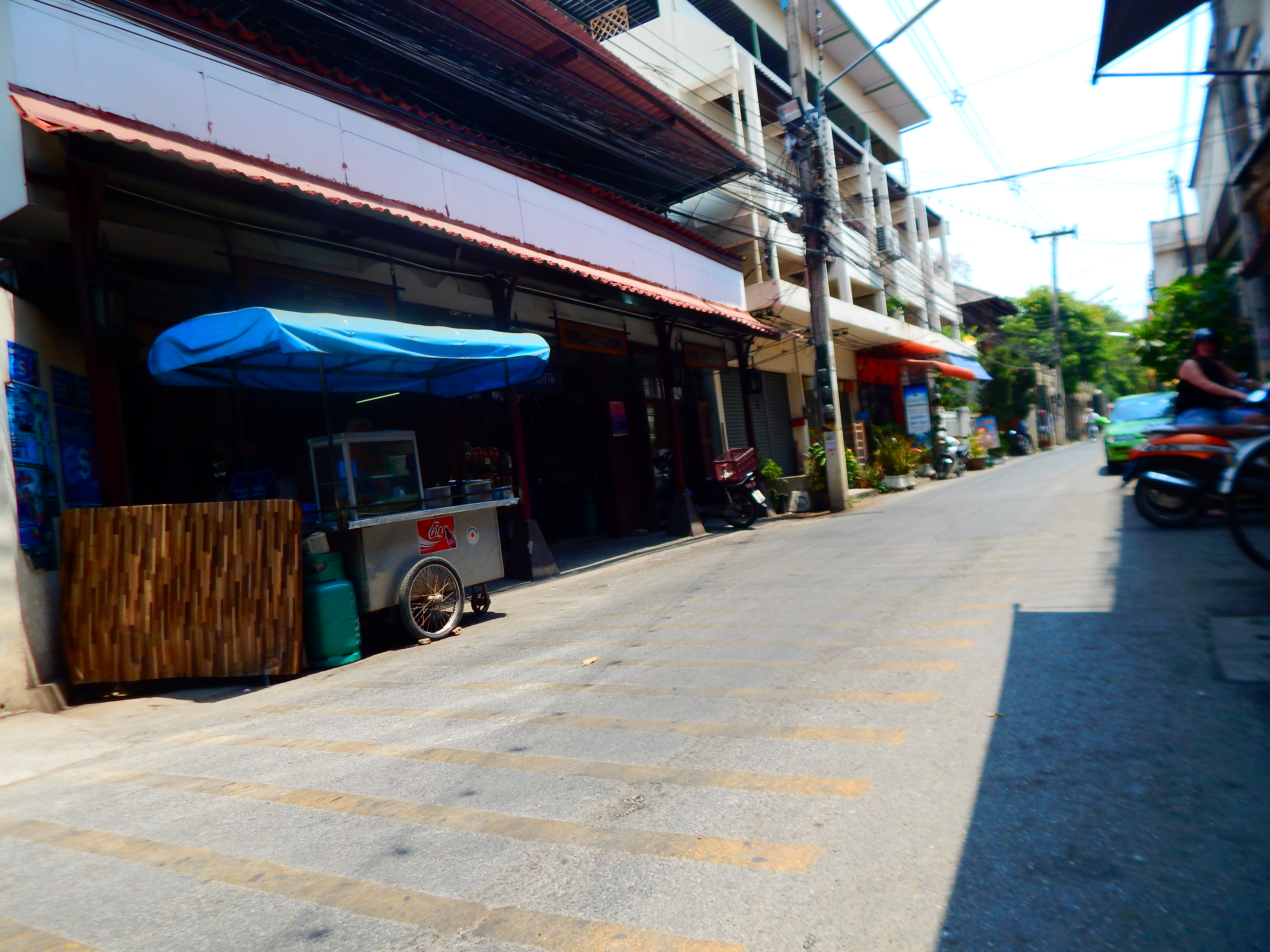 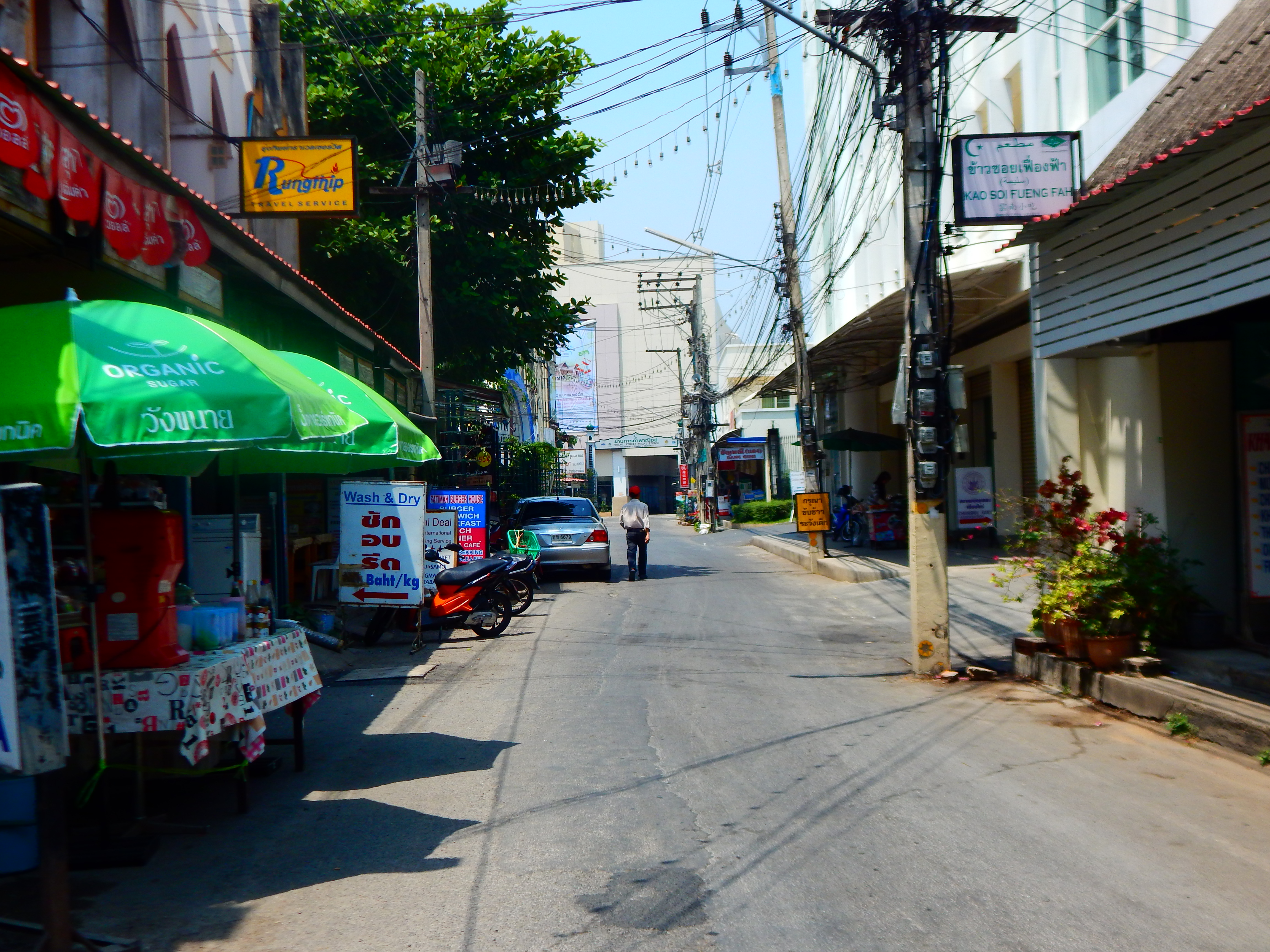 Do you know any other restaurant or food market to get a good khao soi? Let me know in the comment below. I would love to try this dish again when I visit Chiang Mai, Thailand. 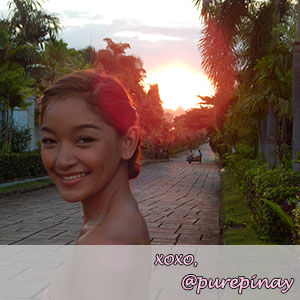 Check Out My Previous Blogs During My Trip to Thailand: A Clever Illusion Of Floating Faucet In Thailand 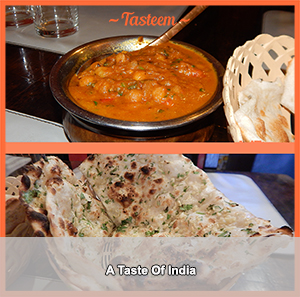 That Day When I Finally Found Good Thai Food in Pattaya! (P. S. Do not upvote if the blog is more than seven days old)

Join the @actifit community and get an upvote!!!

Select Log in, if you're a current steemit user

Want to get more upvotes? Join @Partiko, The Innovative Mobile Steem App plus, get 3,000 free tokens and earn unlimited tokens from referrals! Partiko points can be use to upvote your own post 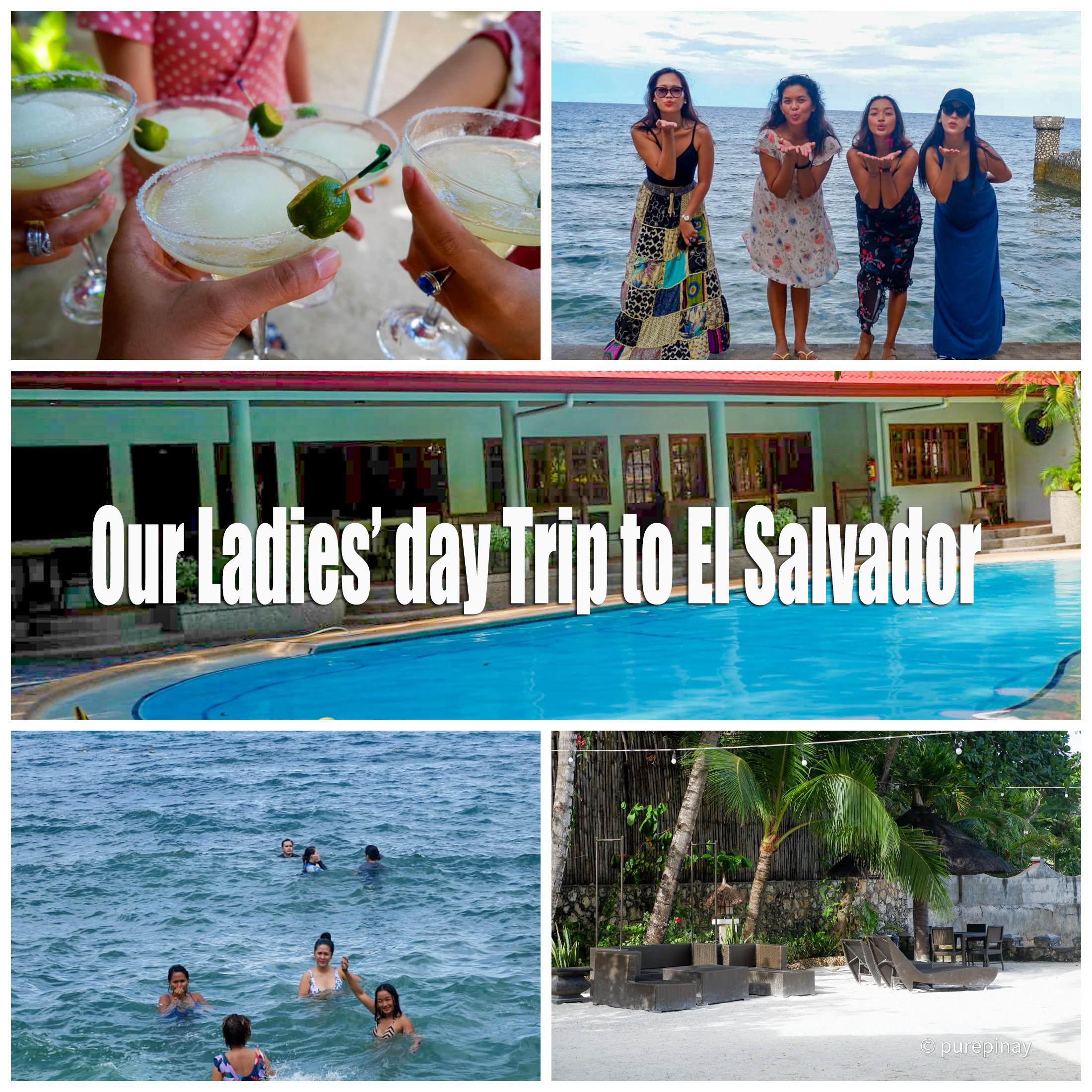