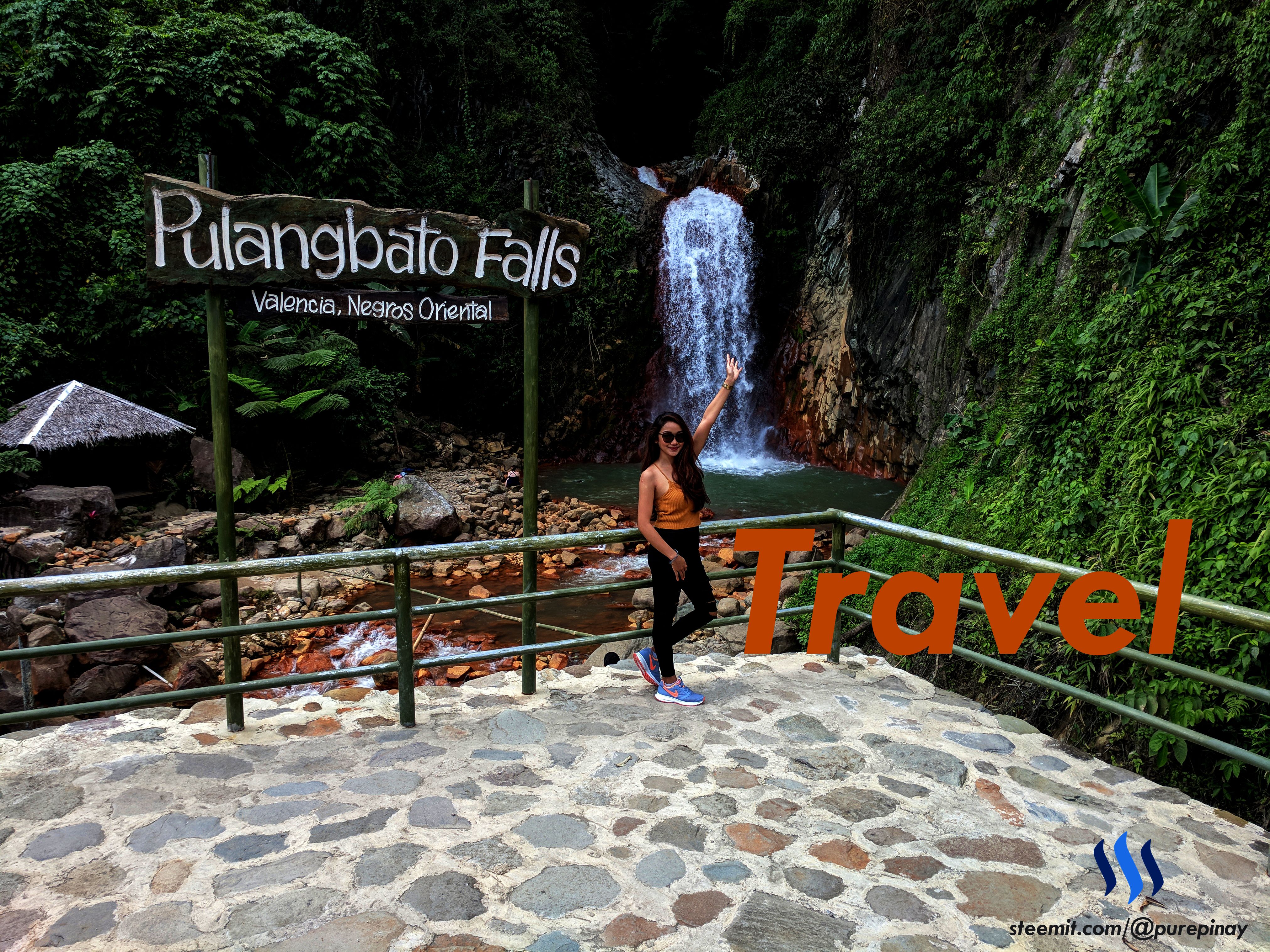 After our stop at Tierra Alta, per recommendation from the motorbike driver- We headed to the waterfall called Pulangbato, (Which translated into English means, 'Red Rock'. This waterfall and sulfur springs are situated in Ocoy Valley in the town of Valencia which is approximately 25 minutes away from Tierra Alta. If you are coming from Dumaguete proper, it would take at least an hour.

@bonjovey and I hopped on our driver's bike and enjoyed the cool and fresh air we aren't always used to receiving in Cebu City. If I had known that Valencia was so beautiful and clean. Free of an industry- I am sure I would have convinced my boyfriend years ago, to relocate there with me. Most of the time that we want to go out, we dread the traffic here- And so we end up staying in more often than we would like. In Dumaguete, and the surrounding towns there are a lot of colleges, but as for large employers, the biggest companies exist in Manila or Cebu.

A few months ago I was reading an article about how the Philippines is now taking over as the BPO center of the world, which was previously held by India. If I had to guess, it would be because of the English accent, and a fairly comparable salary range.

Heading towards the falls and hot springs, my head was on a swivel. Everywhere here was so lusciously green and clean. The air wasn't so thick as it is in Cebu City, and the people everywhere seem much more friendly and eager to help with directions. I guess when one lives in an environment that is free from traffic and pollution, as well as crowds in every shop and restaurant- It is easier to live happily, free from the stresses that come with the city life. And this is why my dream is to own a country house, with a few acres of land- Not terribly far from a major city, but distant enough to see more animals than people :) 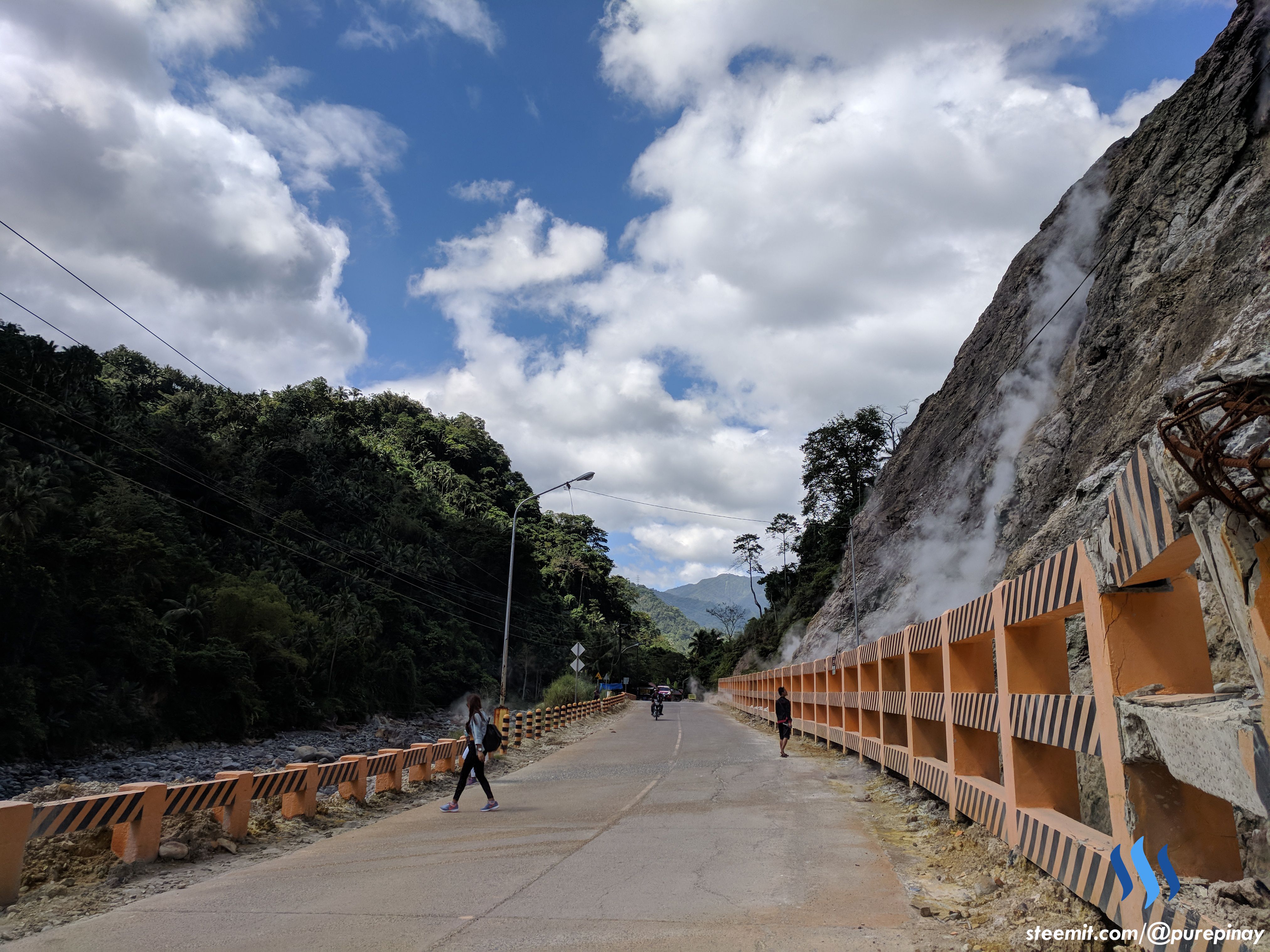 After about 10 minutes into our trip, our driver tapped me on the leg to point to the right side of the road, where there was a big cliff that was smoking. I yelled excitedly to ask him to stop, as I never saw something like this before. At first, I thought it was the clouds- Or maybe even mist from a local waterfall. Actually, this steam comes from the springs in the area. Unlike the hot springs we were going to, this area had a strong sulfuric smell; Which if you aren't familiar, smells quite a bit like rotten eggs! According to our driver, there was a small volcanic eruption about four years ago but the destroyed fence that you can see in the photo was due to the recent typhoon. 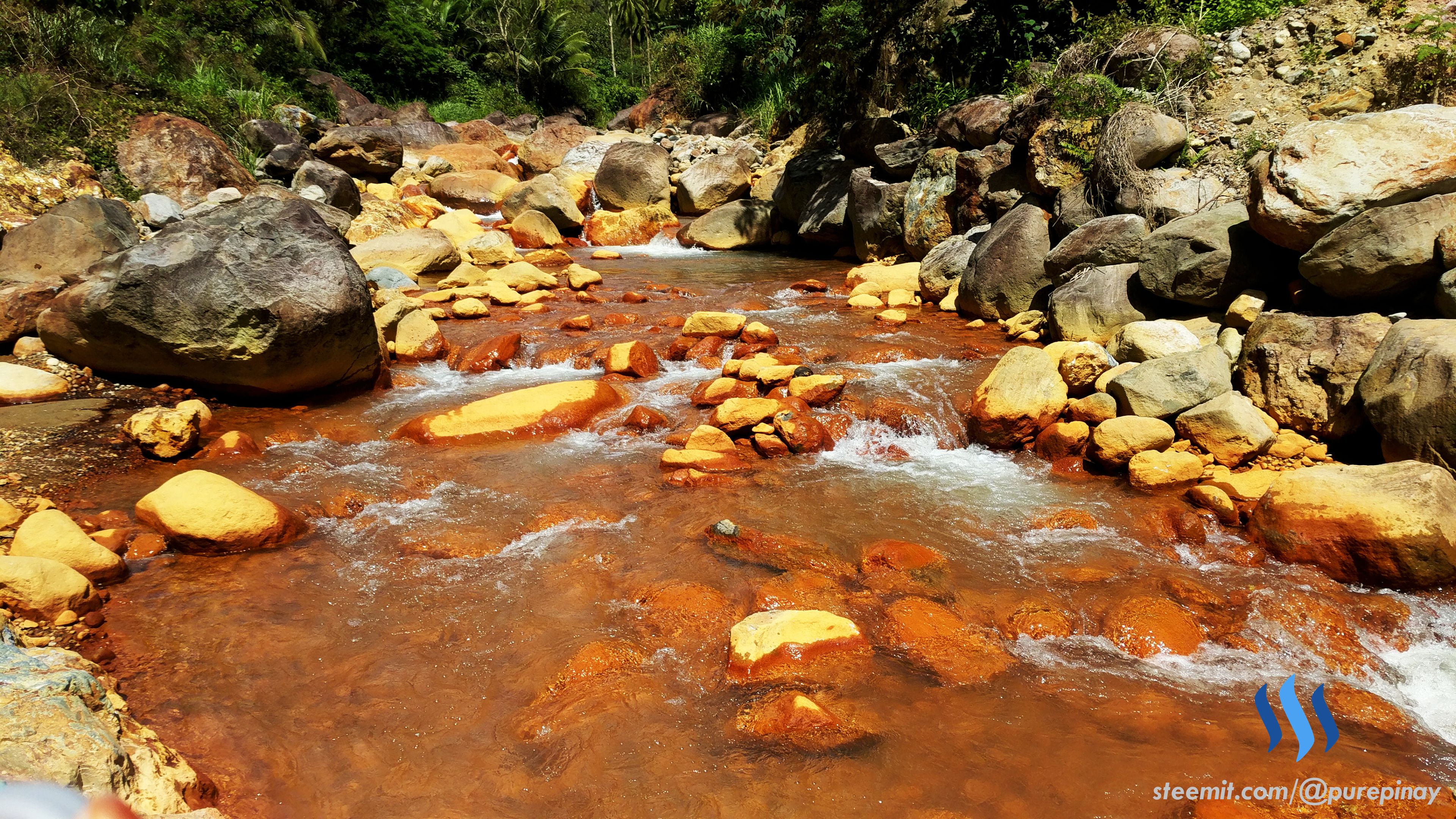 The first waterfall was named 'Pulangbato Falls', and although it wasn't massive, it is a beautiful display of nature. I always wonder how this water continues to fall, 24/7 365 without running dry. I realize it comes from the rain in the mountains, but still- Wow! The water here was clean enough to drink but too cold to enjoy swimming in :). When I say cold, I would only guess that it was 70 degrees or so, but for us Filipinos, this may as well be Antarctica. (The average temperature here is about 85 degrees, and 90% humidity). 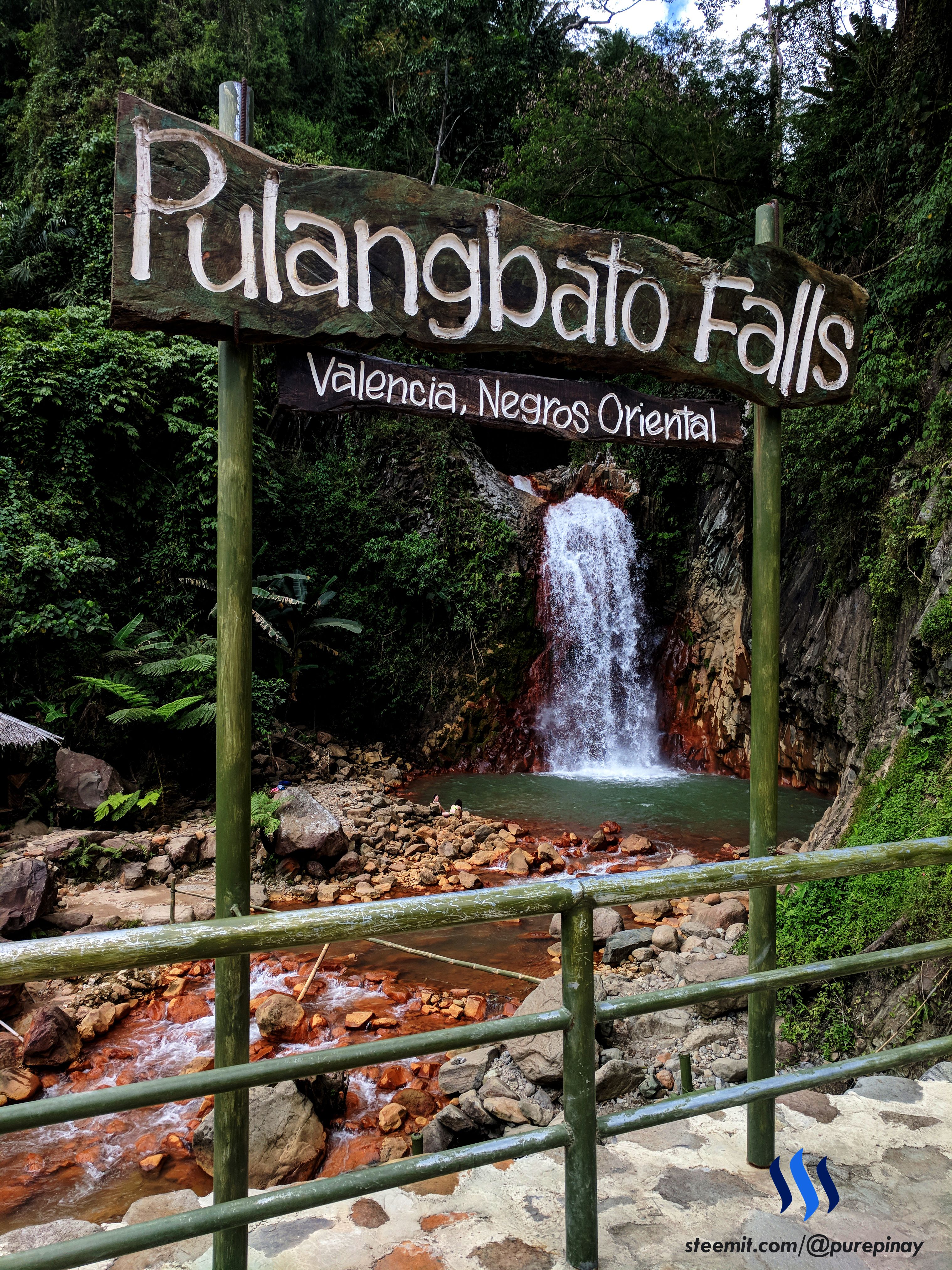 The entrance fee to see the falls up close, and to swim in it was just 50 Pesos ($1 USD). I never mind paying fees to visit state parks, as I know there is a lot of upkeep and security to pay. A lot of these funds go directly to the individual sites, which allows them to be preserved for many generations to come. 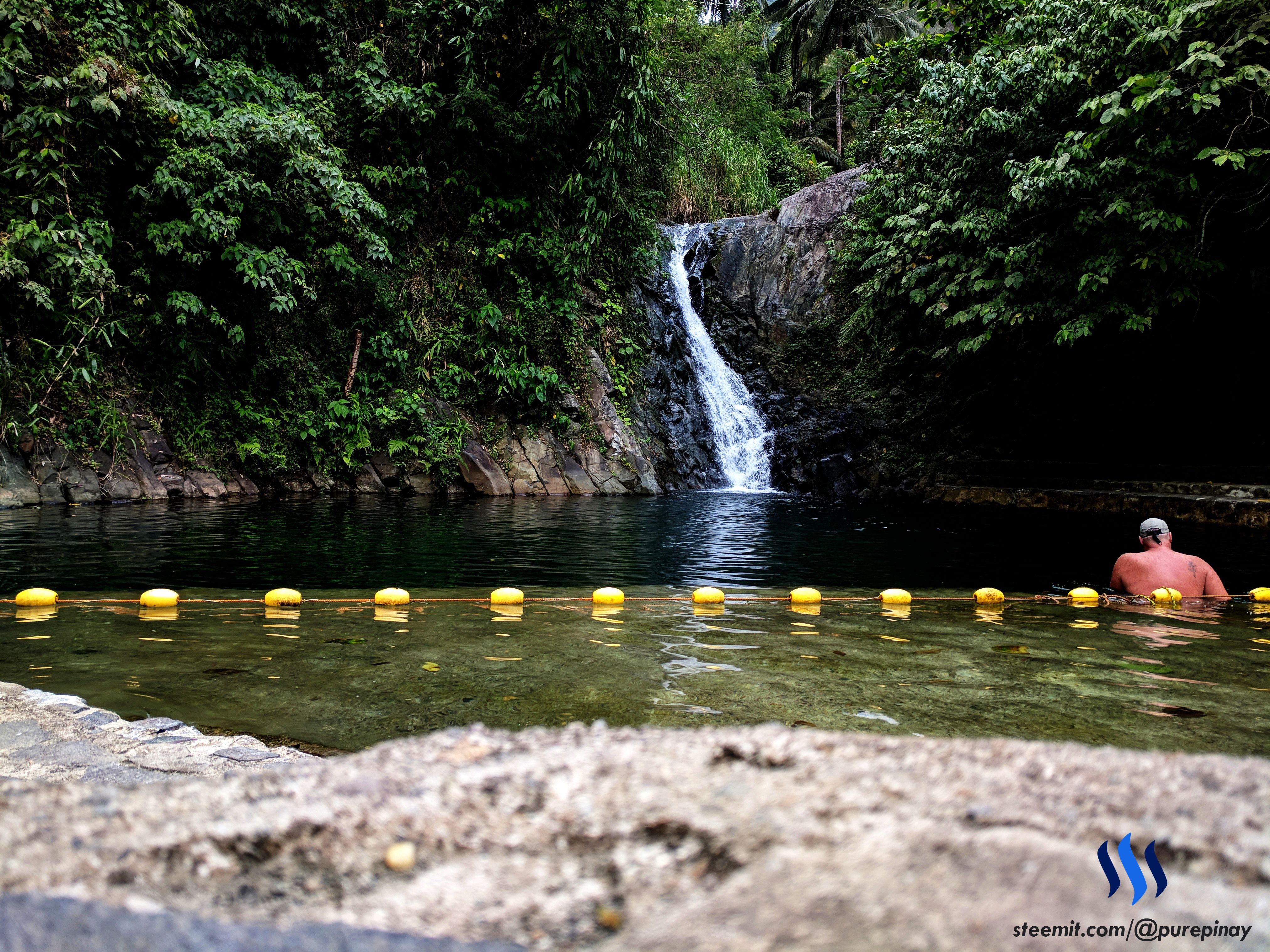 The photo above is the another waterfall in the same area but a smaller one. After about a half an hour of taking some photos and people watching at Pulangbato falls, @bonjovey and I decided to head to the hot springs. Since we took tons of photos and weren't going swimming, and also getting hungry again- We packed up our things and had our driver bring us to Red Rock. At the waterfall, there was a small snack bar, but the menu was limited and our driver told us there was more food available at the hot spring, which was just 5 minutes away. 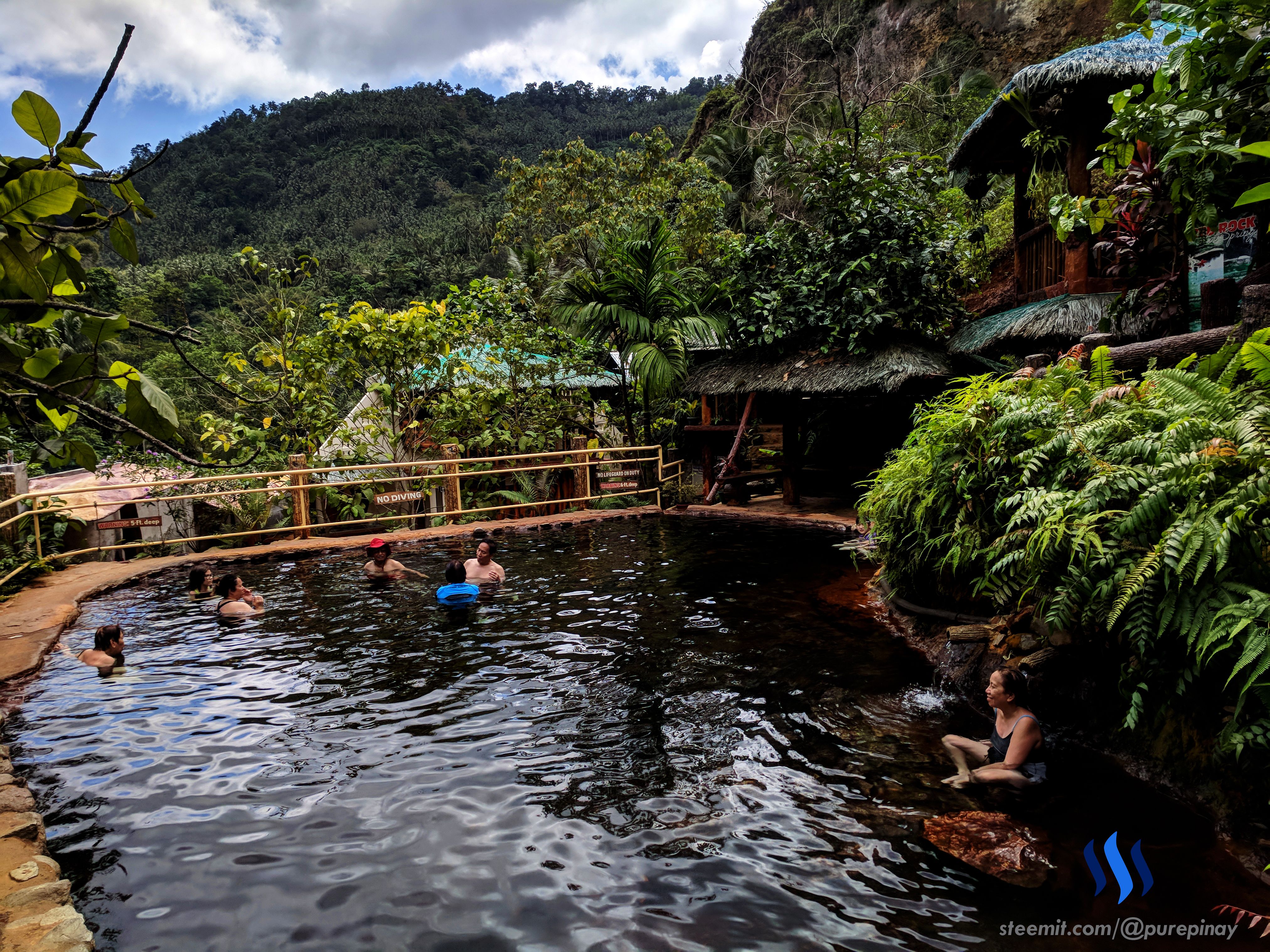 These springs are heated geothermally from the earth's crust and didn't have too much of a sulfur scent as some I have been to previously. The hot springs here are of a temperature not too hot to enjoy, and when we went there were only about 10-15 other people visiting at this time; And only half that many were in the water. 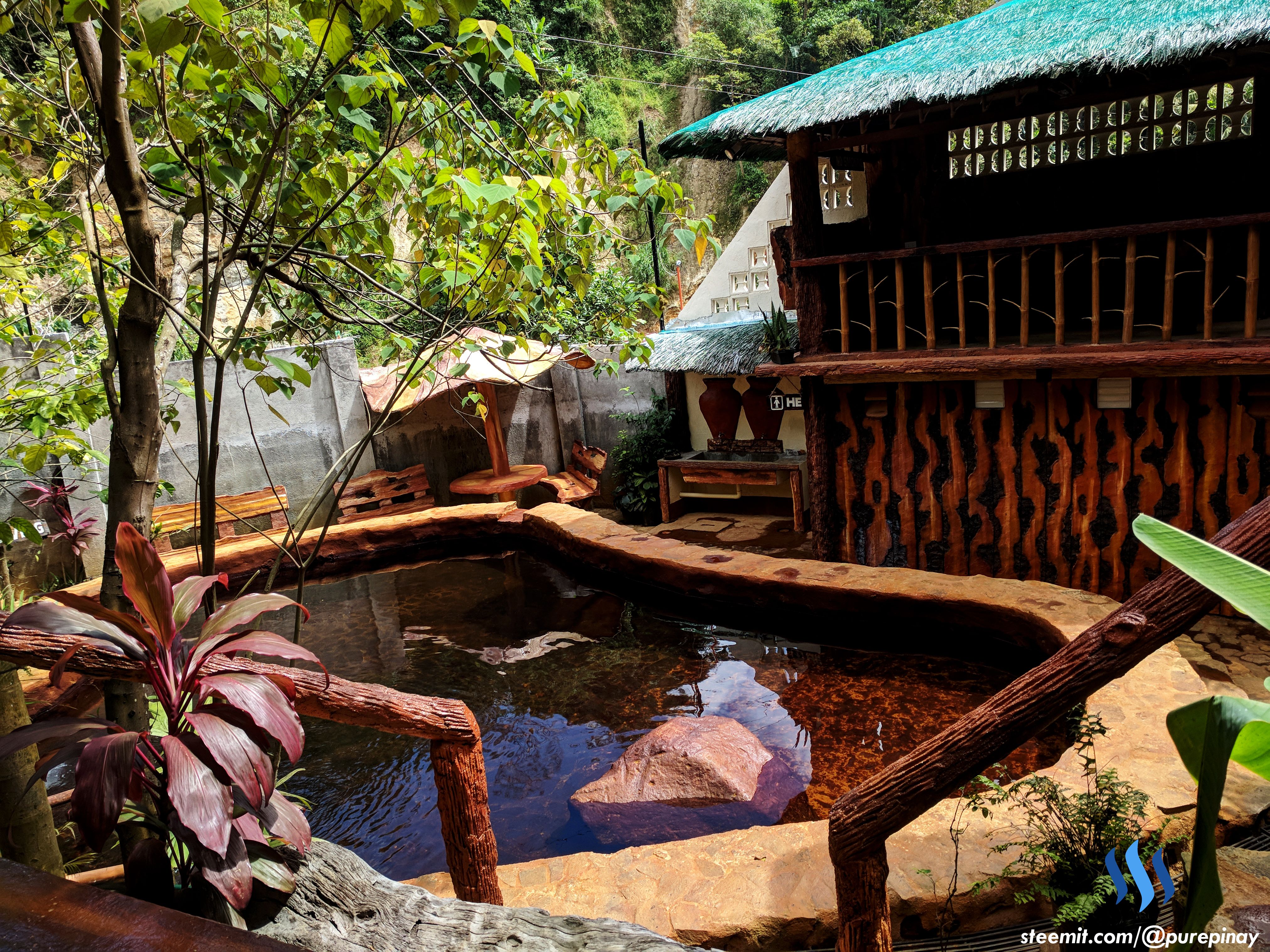 We were hoping to get our lunch here but they didn't have their Chef on duty so we ended up buying a bunch of bananas at 3 pesos each (0.057$). We felt bad for our driver because since it was well past lunch and he was taxiing around and having to be our photographer for two needy girls for the past few hours . We headed back to the town to grab some lunch and we found Naspri Bistro along the way, it was a quite place that served decent food for a fair price but I didn't expect much from it.

After we finished eating, we talked to Jing-jing (our driver) and he told us an even bigger waterfall that was about an hour from the restaurant. Bigger? Why didn't he take us to this one first? I guess he was trying to save the best for last. At this point, me and @bonjovey were full and a bit tired but we didn't want to miss out on what could be the highlight of our trip especially since we may never come to Negros again.

When I mentioned going to the falls to one of my friends who previously visited Dumaguete a while back, she told me that Valencia is technically not part of Dumaguete City, but rather a different town in Negros Oriental. Now, this made me stop and I looked at my previous blog- Tiera Alta where I included Dumaguete on the title. So I'd like to take this chance to correct that Tiera Alta is in Valencia since I cannot make any changes in that blog (grinning face).

The road heading up to this second fall was steeper compared to Pulangbato, and it made the motorbike's engine sound strange with ticking noises. I was a bit scared to be honest, because I wasn't sure if we were going to make it to the top. Jing-jing (our driver) enthusiastically told us not to worry because he's been driving the same motorbike and to him, it's always an adventure going up the hill. Mainly, I was worried about having to walk if the bike overheat :) 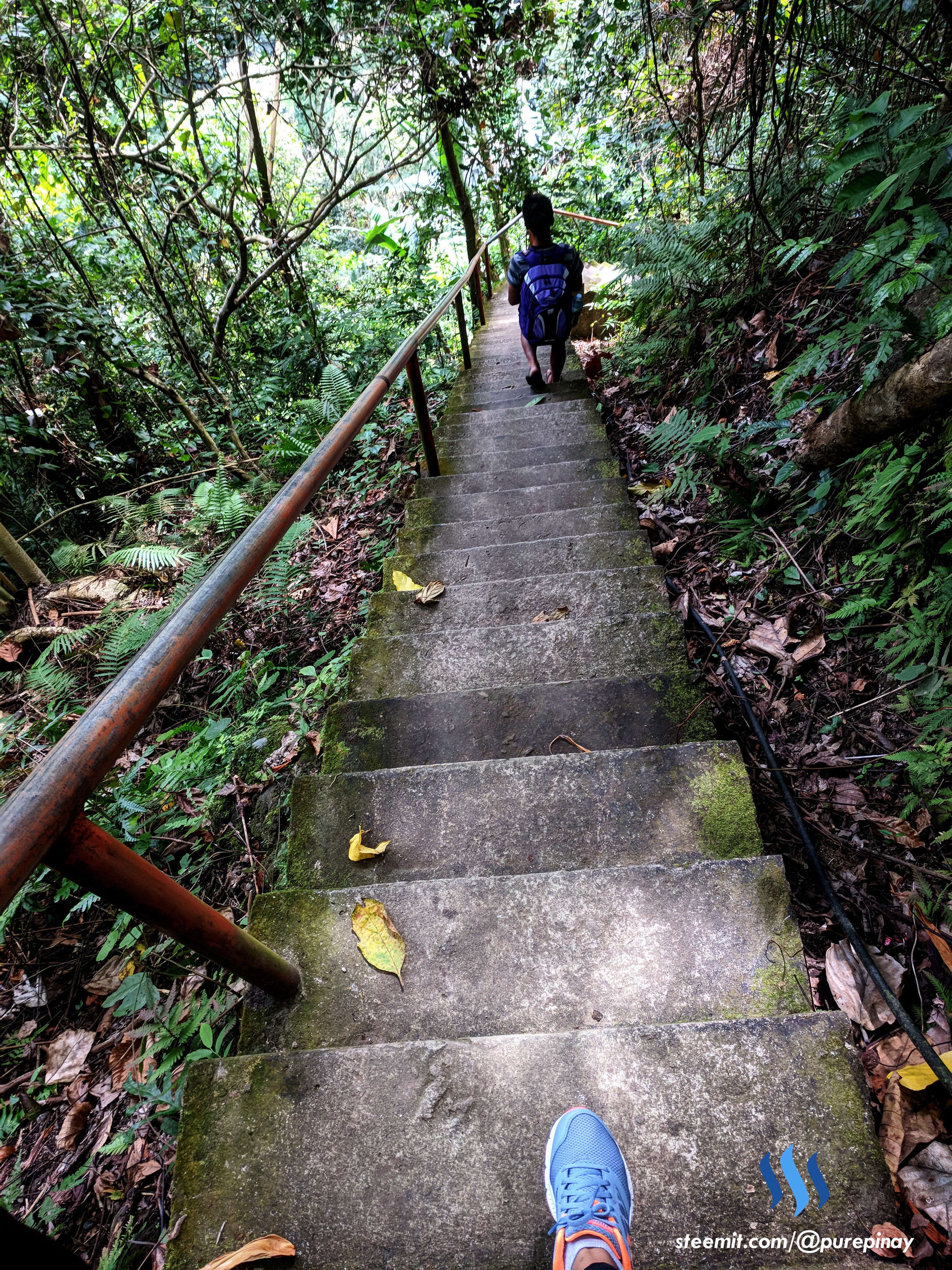 We finally got to our destination after about an hour but it didn't end the excitement since we had a long downhill, rocky hike to get to the waterfall. Our driver parked his motorbike and ask a guide to take us to the waterfall so we wouldn't get lost. We paid just 10 pesos each for the entrance fee, and 50 pesos each (1$) for the local tour guide. Many people don't think the guide is necessary, but @bonjovey and I had our bags with us with some important documents (My passport renewal papers), so we didn't want to take the chance of losing it- even though the driver was really nice it's always better to be on the safe side. 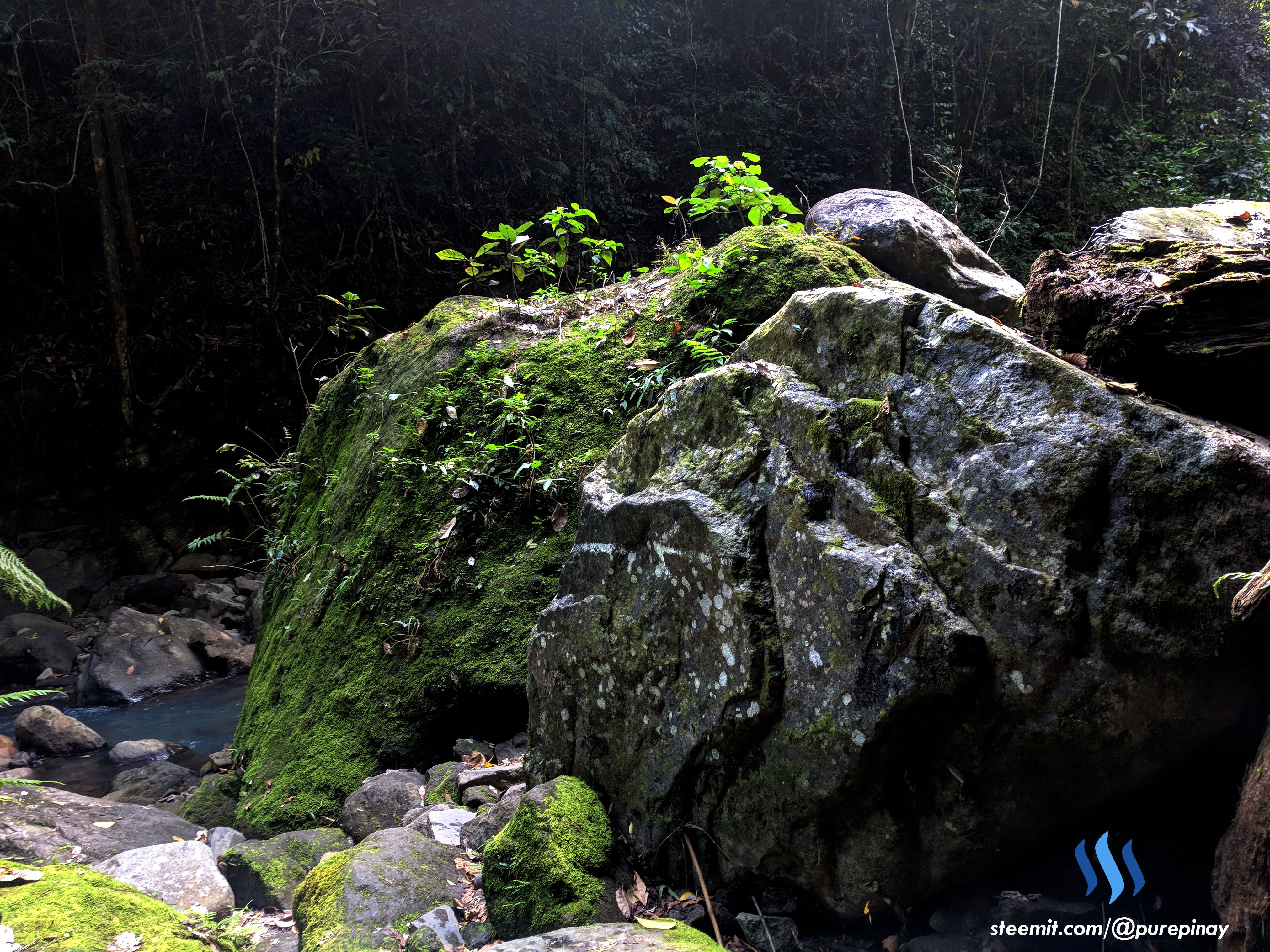 The trail to the fall was challenging and exciting because we had to go through this enormous 335+ steps to hike down (And on the return, back up :( ) and through some river beds. I am sure this is why our driver didn't join us- He knew it was a heck of trek especially hiking back (sneaky! haha).

There were some vast rocks as big as whalebacks and broken paths that would have made our trail even more difficult without the tour guide's help. I wish I was prepared for this kind of adventure so I would have brought the right clothing, and shoes lol! The original plan was that we were going to change our clothes (since we were both wearing pants) once we get to the fall so we can go swimming this time hence we didn't get the chance to swim at the first waterfall or the hot springs. Even before we got to the fall we had to change our clothes because we had to cross some streams that lead the path the fall and we didn't want to bring heavy wet clothes with us, and we didn't have any ziplock bags. 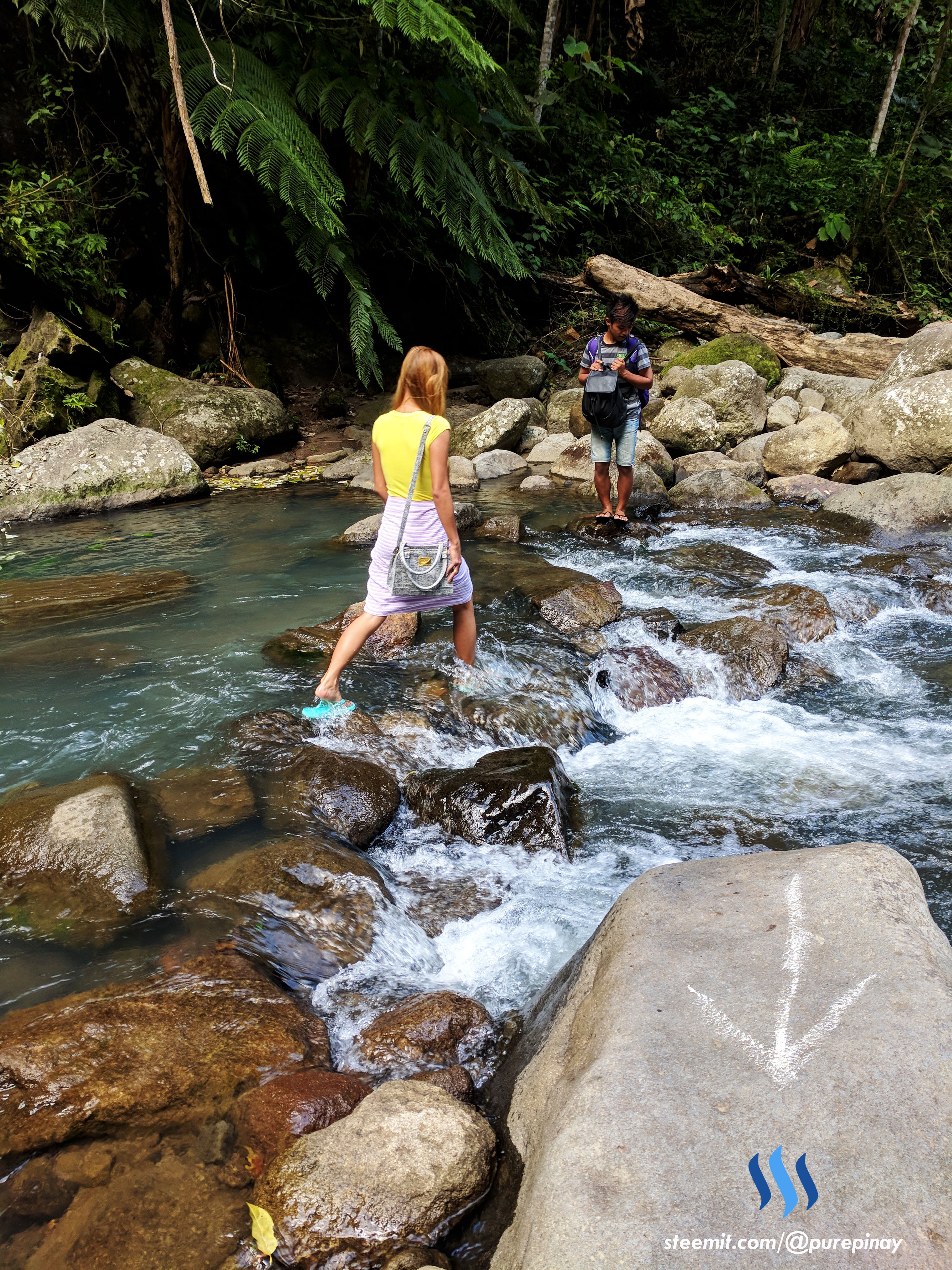 Another good thing about getting the tour guide was that he showed us the right pathway and which stones to step on because a some of the rocks were slippery. I noticed a collapsed bridge and our tour guide said that it was a man-made trail to the waterfall but it was recently destroyed by a typhoon. I was laughing at my friend @bonjovey because she was second-guessing our guide when he kept saying “we are almost there” for the last 20 minutes. 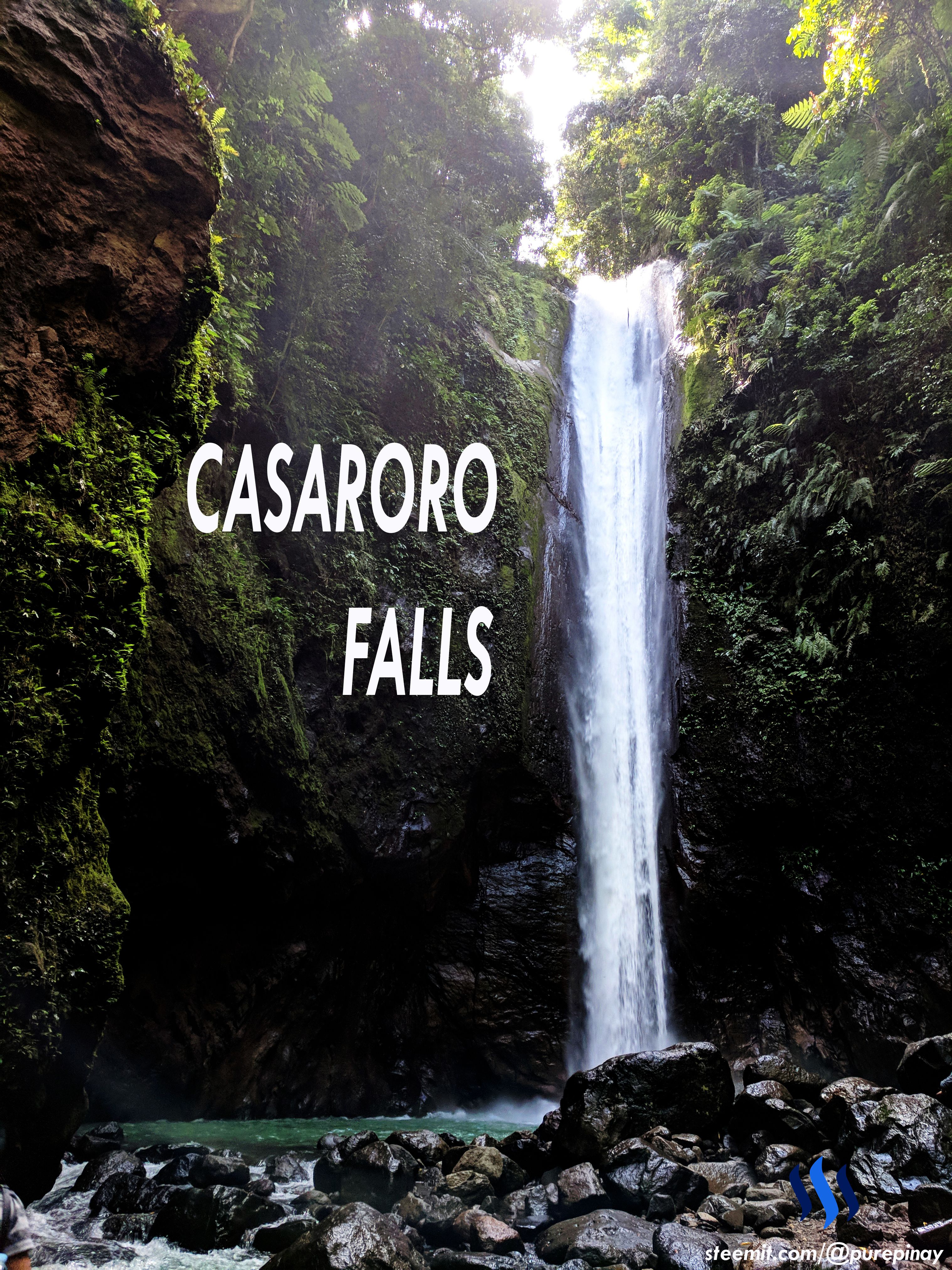 Finally, after about 35 minutes which I happen to get an eyeful on my wristwatch, we reached the thundering vertical steep drop called Casaroro Falls. Even though @bonjovey and I were not able to go swimming because of the coldness of the water, we enjoyed splashing water at each other and it to me, it was well worth the effort to visit this majestic waterfall!

We paid 1000 pesos (20$) to our driver even though he only asked for 700 pesos, he was really nice and had a pleasing personality.

If you happen to plan a visit to Dumaguete I would recommend to also visit the town of Valencia and explore nature at it's best. Also, feel free to contact Jing-jing at +639367929244, he'll be happy to show you around and please extend my regards! ;)

This here ends my trip to Dumaguete and Valencia, I hope you all find this helpful and a fun read. Till next time!